Actinomycetes are aerobic, spore forming gram-positive bacteria, belonging to the order actinomycetales characterized with substrate and aerial mycelium growth. They are the most abundant organisms that form thread-like filaments in the soil and are responsible for characteristically "earthy" smell of freshly turned healthy soil. 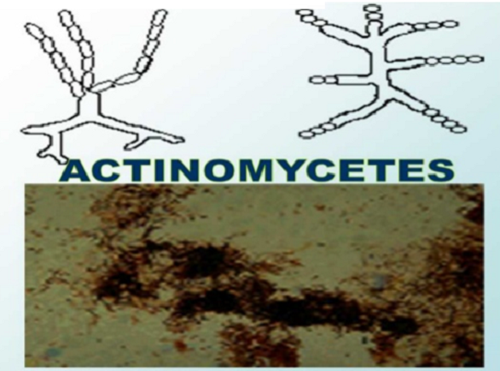 They play major roles in the cycling of organic matter; inhibit the growth of several plant pathogens in the rhizosphere and decompose complex mixtures of polymer in dead plant, animal and fungal material results in production of many extracellular enzymes which are conductive to crop production. The major contribution in biological buffering of soils, biological control of soil environments by nitrogen fixation and degradation of high molecular weight compounds like hydrocarbons in the polluted soils are remarkable characteristics of actinomycetes. Besides this, they are known to improve the availability of nutrients, minerals, enhance the production of metabolites and promote plant growth regulators. Furthermore, actinobacteria do not contaminate the environment instead, they help sustainably in improving soil health by formation and stabilization of compost piles, formation of stable humus and combine with other soil microorganisms in breaking down the tough plant residues such as cellulose and animal residues to maintain the biotic equilibrium of soil by cooperating with nutrient cycling.

The Actinomycetes, forming soil micro-flora have gained the greatest importance in recent years as producers of therapeutic substances.

Many of the Actinomycetes have the ability to synthesize metabolites which hinder the growth of bacteria; these are called antibiotics, and, although harmful to bacteria are more or less harmless when introduced into the human or animal body. Antibiotics have in modern times great therapeutical and industrial value.

The past decade has seen considerable interest in the Actinomycetes as producers of antibiotic substances. The successful use in chemotherapy of streptomycin, chloromphenicol (Chloromycetin is the trade name of this substance), aureomycin and terramycin all metabolites of the Actinomycetes, has stimulated the search for new Actino­mycetes and new antibiotics among the Actinomycetes.

The genus Streptomyces is the largest and the most important one, antibiotically speaking.

Next： 1.21 Million Rural Households Benefit from Farm Machinery Subsidies in 2020