Fungi are an important part of the microbial ecology. The majority of fungi decompose the lignin and the hard-to-digest soil organic matter, but some fungi consume simple sugars. Fungi dominate in low pH or slightly acidic soils where soils tend to be undisturbed (Lavelle & Spain, 2005). Fungi break down the organic residues so that many different types of microbes can start to decompose and process the residues into usable products.

Approximately 80 to 90 percent of all plants form symbiotic mycorrhizae fungi relationships by forming hyphae networks. The hyphae are about 1/60 the diameter of most plant root hairs and assist the plant in acquiring nitrogen, phosphorus, micronutrients and water in exchange for sugar produced by the plant. This mutually beneficial relationship is called a mycorrhizae network (Magdoff & Van Es, 2009). Figure 1 shows soil fungus forming mycorrhizae networks.

Hyphae interact with soil particles, roots, and rocks forming a filamentous body that promotes foraging for soil nutrients. These networks release enzymes into the soil and break down complex molecules that the filaments then reabsorb. Fungi act like natural recycling bins, reabsorbing and redistributing soil nutrients back to plant roots. Most hyphae are either pure white or yellow and are often misidentified as plant hair roots (Islam, 2008). Figure 2 shows mycorrhizal fungi. 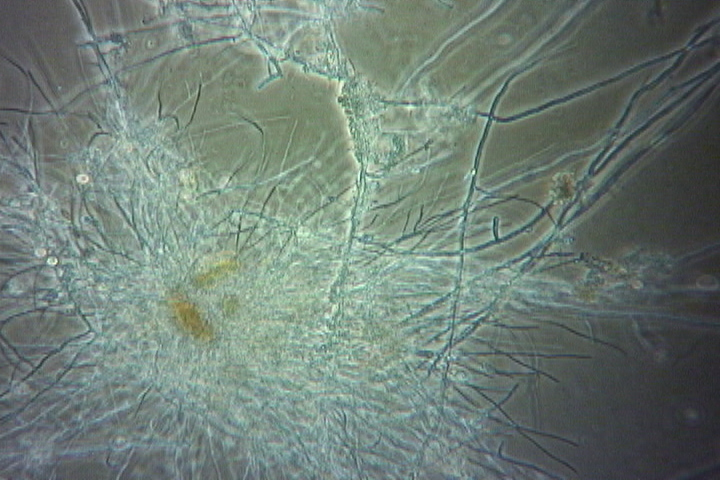 Mycorrhizal fungi are usually white or yellow while the root at the top is a light brown or tan color.

The rhizosphere is an area next to the root dominated by soil microbes where many chemical and biochemical process occur. Soil fungi make up 10 to 30 percent of the soil rhizosphere. Generally there are fewer individual fungi than bacteria but fungi dominate the total biomass due to their larger size in a healthy soil. Fungi biomass in the soil ranges from the equivalent of two to six cows in a healthy soil or 1,100 to 11,000 pounds of biomass (Metting, 1993, Sylvia et al., 2005).

Fungi prefer slightly acidic conditions, low disturbance soils, perennial plants, internal nutrient sources directly from the plant, and highly stable forms of organic residues with high carbon to nitrogen (C:N) values and slower recycling time. Bacteria dominate in highly disturbed ecosystems with fast nutrient recycling, low C:N values, prefer annual plants, and external nutrient additions outside the plant (Lavelle & Spain, 2005). Bacteria are single-celled organisms and need a film of water to survive, while fungi are multi-celled organisms that grow rapidly and in great lengths in the soil (feet or meters). This allows fungi to bridge gaps in the soil so as to transport nutrients relatively far distances back to the plants (Lowenfels & Lewis, 2006).

Taxonomy and Functional Groups of Fungi

There are at least 70,000 different species of fungi identified but it is estimated that there may be 1.5 million species worldwide (Hawksworth, 1991, 2001). Genetically, fungi evolved a billion years ago and are closely related to plants and animals. Membrane bound organelles present in each cell are similar to those found in insects, plants and animals. Fungi have 80 percent or more of the same genes as humans (Dick, R., 2009).

There are four major groups of soil fungus: Zygomycota, Ascomycota, Basidiomycota, and Deuteromycota. Zygomycota are less than 1,000 species and are mostly common bread molds. Ascomycetes have about 30,000 species and are mostly yeasts used in baking. Basidiomycetes include most mushrooms, toadstools and puffballs, while Deuteromycota include the lichens and the mycorrhizal fungus (Biological Diversity: Fungus, n. d.; Lavelle & Spain, 2005). Fungi are classified as heterotrophs so the carbon source originates from the decomposition of organic compounds or residues (Sylvia et al., 2005).

Decomposers are also called saprophytic fungi which decompose cellulose and lignin in the soil. Sugar fungi called Zygomycetes decompose the simple sugars but most fungi decompose the more recalcitrant or hard-to-decompose organic residues high in cellulose, hemicellulose, lignin or cell walls. Some of the byproducts of this decomposition may turn to humus and remain in the soil for thousands of years (Ingham, 2009; Lavelle & Spain, 2005; Lowenfels & Lewis, 2006).

Pathogenic fungi cause many agricultural root diseases including Phytophthora, Rhizoctonia, Phythium, and Verticullium, and downy mildew Ascomycetes fungi are microscopic in size and dominate in agricultural soils and grassland while the Basidiomycetes have large fruiting bodies or mushrooms that dominate in high residue and forested soil (Dick, R., 2009). Some fungi help to control diseases and predators including a nematode trapping fungi that feeds on insects and can be used as biological controls.

Mutualistic mycorrhizal fungi form a beneficial relationship with plants. Ingham (2009, pg. 23) states that “mycorrhizae grow within the root cells and are commonly associated with grasses, row crops, vegetables, and shrubs. Some plant species like the Cruciferae family (e.g., cabbage, broccoli, mustard and canola) and the Chenopodiaceae family (e.g., lambsquarters, spinach, beets, and oilseed radish) do not form mycorrhizae associations.”

The microbes and plants together regulate many soil processes including the carbon cycle and nutrient recycling. The microbial species diversity and the total microbial population determine the ability of plants to obtain soil nutrients like nitrogen, phosphorus and micronutrients. Plant diversity and abundance may change the entire soil ecosystem through the release of root exudates that attract or inhibit the growth of specific organisms. These carbon-rich substances can range from less than 10 percent to as much as 20 percent of a plant’s total carbon production (Sylvia et al., 2005). Plants secrete large amounts of specific carbon compounds into the soil to be used by the microbes as a food and energy source and to enhance and improve soil structure. By encouraging certain microbial species to grow, the microbes in return supply nutrients to the plant roots and encourage the microbes to protect the plant from pathogenic microbes. Plants feed, raise and encourage certain microbes just like farmers raise and feed plants and livestock for food and fiber.

Many plants have a preferred fungus to bacteria ratio (F:B ratio). Most vegetable crops prefer more bacteria with a F:B ratio of 0.3 to 0.8 F:B which is optimal for carrots, lettuce, broccoli and cole crops. Tomatoes, corn and wheat like an F:B ratio of 0.8 to 1:1. Lawns prefer a F:B ratio of 0.5 to 1:1 and on forested soils, trees grow better with a F:B ratio of 10:1 where the soil is more acidic. Many conventionally tilled agricultural soils have a F:B ratio of 0.1 to 0.3 with soils that are high in nitrogen, low carbon, neutral pH, and with disturbed soil conditions which promotes weed production. Annual crops prefer lower F:B ratios and perennials prefer a higher F:B ratio (Lowenfels & Lewis, 2006). Many plants cultivate certain species of both bacteria and fungus to increase nutrient extraction from the soil.

Fungi benefit most plants by suppressing plant root diseases and fungi promote healthier plants by attacking plant pathogens with fungal enzymes. Fungi also use antagonism to reduce competition by producing antibodies, which suppress other microorganisms from growing. They produce many vitamins which promote plant growth. By competing with other fungus for nutrients, beneficial fungi prevent pathogenic and disease-causing organisms from getting established.

Beneficial fungi along with some bacteria may also form protective webs and nets around roots and even leaves to protect the host plant (Lowenfels & Lewis, 2006; Sylvia et al., 2005). The fungus Trichoderma protects plant roots from attack by harmful microorganisms. Fungi also protect plants by supplying a protective sheath to supply both water and phosphorus to the plant roots during droughts (Magdoff & Van Es, 2009).

Hyphae must be in close contact with living or dead organic soil residues to absorb nutrients, so they usually grow in association with other soil microorganisms. They compete aggressively for scarce nutrients, and competition usually results in a succession or change in microbial populations as nutrients are absorbed or depleted. Initial colonizers absorb simple sugars, amino acids, and vitamins from plant parts such as fruits, seeds and vegetables, and are classified as “sugar fungus.” The dominance of these fungi is short-lived because waste products accumulate quickly.

Cellulose degraders appear next and they are the most diverse fungi and competitive. For example, degradation of straw with high C:N ratio (80:1) requires that fungus parasitize or decompose other fungi to obtain nitrogen for growth and enzyme production. Degradation of lignin is stimulated by low nitrogen. Lignin makes up 60 percent of the total mass of humus, but the low number of fungal species that can degrade lignin reduces competition (Dick, W., 2009).